Petra is an ancient city located in present-day Jordan. It is one of the most famous historical and archaeological sites in the world. It was built by the Nabataean Arabs in the 3rd century BCE (more than 2,000 years ago) and is known for its rock-cut architecture. The city was a major center for trade in the ancient world and was also an important religious site. Petra was named as one of the New Seven Wonders of the World in 2007. It is also a UNESCO World Heritage site. Petra has a unique and breathtaking landscape of towering cliffs, narrow canyons, and ancient ruins carved into the rock. You can explore the city by foot, horseback, or camel, and see the famous Treasury, the Monastery, the Roman Theater, and many other sites.

Jerusalem is a city in Israel and one of the oldest cities in the world, with a history that dates back to ancient times. It is considered a holy city by Jews, Christians, and Muslims. It is home to many religious and historical sites such as the Western Wall, the Church of the Holy Sepulchre, and the Dome of the Rock.

Traveling from Jerusalem to Petra can be a bit complicated, but it is definitely worth the effort. Petra is located in the southern part of Jordan, about 400km from Jerusalem.

There are numerous ways to get to Petra from Jerusalem, each one suitable for a particular price range, amount of time, and preferred mode of transportation.

These means of transportation from Jerusalem to Petra, including by plane, bus, or car, but some Options are more convenient and comfortable than others. Whichever option you choose, it is important to plan ahead and make sure you have all the necessary documents, including your passport and visas. It is also a good idea to check the current security situation and any travel warnings before you go.

Which Type of Tour is the Best When Travelling from Jerusalem to Petra?

Whether you are travelling by air or by road, it always good to go by a tour especially if you are not very familiar with the intended destination. The most two popular types of tour that many travelers use are:

Things to Consider Before Travelling

Before embarking on the journey from Jerusalem to Petra, you need to have a plan, write out the budget to have an estimate of the total amount of money involved. The following should make the list in your budget:

Traveling from Jerusalem to Petra by air

The quickest and most convenient way to get from Jerusalem to Petra is by air.  The estimated distance between the two destinations by flight is approximately 166-miles. It takes roughly an hour to fly from Ben Gurion Airport in Tel Aviv to Queen Alia International Airport in Amman, Jordan. You can drive or take a bus to Petra from there. Direct flights from Tel Aviv to Amman are provided by a number of airlines, including Royal Jordanian and El Al. Royal Jordanian Airlines operate two to three flights per day from Tel Aviv to Amman.

Flight tickets fluctuates, but the average price is in the neighborhood of between $240-$300 for the destination you’ve selected is around 250 USD. The least amount you can buy any ticket is between $150-$200.

On arrival in Amman you can get a taxi to the historic city of Petra in around 2-3 hours, with a cost of around $125 USD either to or fro.

Traveling from Jerusalem to Petra by Road

If you are not at home with air travel, you can take a private car or a taxi from Jerusalem to Petra (the distance between the two cities is about 278 miles by road). This option is much cheaper and gives you more flexibility, but it is time wasting and less convenient. You can hire a car with a driver or take a taxi from Jerusalem to the border crossing at Allenby Bridge/King Hussein Bridge. From there, you will cross into Jordan and continue on to Petra. This option is less convenient as earlier stated than flying, as it takes about 6-8 hours by car and you will have to go through border control procedures. The transport fare is approximately between $150-$280 on the average. Once you cross the border, you will need to take a bus or taxi to Petra. 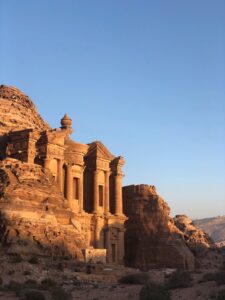 Routes through which you can get to Petra by Road

If you planned to travel to Petra by road, Allenby bridge, one of the few bridges in the middle east is one you must cross. This is the simplest route from Jerusalem to Jordan by road. When crossing, you will meet immigration personnels that will conduct a number of checks as it regards to your visa and other vital documents. It is also important to note that at specified times and on specific Jewish festivals, the crossings may be closed.  Many car hire companies also may not allow you to take the vehicle over the border into Jordan. If they do, make sure your insurance will cover the trip

Apart from passing through Allenby bridge border to get to Petra, another route is through Eilat. Eilat route according to past record is more convenient and pocket friendly. We strongly implore you to go through this route because of its enormous advantages. There are regular public buses which travel between Jerusalem and Eilat. When entering Jordan from Eilat by crossing the border, make sure you are with your visa and other necessary documents. If you don’t have a visa in advance, Jordanian authorities can issue one to you right away. However, if you intend to stay in Jordan for fewer than two nights, you must also pay about $50-$80 USD per person for your visa. Your departure from Israel and return to the nation are covered by this.   A border fee of around $60-$70 USD per person is also required. After crossing into Jordan, you may like to take a taxi or bus to Petra but we advised that you make use of taxi because of the convenient and benefits. Take a taxi to the Red Sea resort of Aqaba as soon as you pass the border to Petra. This will cost about $10-$20 USD.

The best ways to travel from Jerusalem to Petra is by flying or by taking a private car or taxi. These options are more comfortable and convenient, but also more expensive. If you are on a budget, taking a bus from Jerusalem to Allenby Bridge/King Hussein Bridge and then crossing into Jordan to take a bus or taxi to Petra or passing through Eilat to get to Jordan and continue the journey to Petra are viable options. Whatever option you choose, Petra is definitely worth the journey. Its history, culture, and natural beauty make it one of the most fascinating and unforgettable destinations in the world.