Anyone can label it a holiday party by elegantly arranging a few lights and decking it out with nice trinkets, but visitors who actually adore Christmas and other related holidays expect more and as such, we are revealing these enticing places to you.

A number of locations are returning to a boisterous Christmas season in 2022 after two years of subdued or postponed celebrations owing to the Covid-19 pandemic, and this time around should not be missed for any reason.

The North Pole is not actually where Santa Claus and his cheerful missus live, despite what popular myth would have us believe, according to the Finns.

Just north of the Arctic Circle in Lapland, Rovaniemi is their idea of the headquarters for all things Christmas. Children can take calligraphy lessons, go to elf school, bake gingerbread cookies with Mrs. Claus, or write their Christmas wish lists with a genuine quill in this community.

The Ranua Wildlife Park, which is home to young moose, wolverines, and polar bears, may also be of interest to you.

The enigma of the northern lights is unveiled at the Arktikum, a science museum.

For a truly chilly experience, guests can book a room at the Arctic Snow Hotel, which is totally composed of snow and ice but has saunas and hot tubs for defrosting.

Bethlehem, a smaller city for Christmas escape, is close to Philadelphia and New York City.

Bethlehem, which was founded in the 1700s by Moravian colonists, is justly proud of its Live Advent Calendar, which can be viewed every day from December 1 through December 23 beginning at 5:30 p.m.

A town crier calls out to passersby to the Goundie House during this free, kid-friendly event by ringing a bell up and down Main Street (the oldest house on Main Street). Three invitations are given to a child from the crowd to come knock, and after the third invitation, a local company opens its doors with a gift for all.

A huge LED star, life-size toy soldiers, and countless lights are among the new additions to “The Christmas City’s” decor.

The births of Jane Austen and Jesus are both well observed in this ancient city in southwest England.

The greatest spot to find out about the most well-known inhabitant of the city is at the Jane Austen Centre and on-site Regency Tearoom.

The Theatre Royal, which Austen alludes to in “Persuasion” and “Northanger Abbey,” offers a wide range of holiday plays, musicals, operas, and concerts.

The Bath Christmas Market features a large number of wooden chalets selling handmade items that are uniquely British in a charming Georgian setting. The market is a pleasant approach to learn about the personality of this historic city, sandwiched between the majestic Bath Abbey and the venerable Roman Baths.

Bath on Ice is a terrific reason to don your winter gear and put on your skates.

San Fernando in the predominantly Roman Catholic Philippines would be a strong contender if Asia were to have a city designated as Christmas capital.

The region northwest of Manila is known for its Giant Lantern Festival, which runs from December 17 to January 1. The manufacture of lanterns is a late 18th-century custom in San Fernando.

The parol, a vibrant electric Christmas lamp that represents the Star of Bethlehem, is the attraction that makes a trip here stand out. The parols have been compared to prismatic pinwheels, beautiful stained glass windows, psychedelic kaleidoscopes, and giant snowflakes.

Melchior, Gaspar, and Balthazar are places to be and curiously waiting for anyone who can manage to stretch their vacation until the 12th day of Christmas, often known as Three Kings Day or Epiphany.

The three kings, also known as the “three wise men,” arrive at the city’s dock that evening on the Santa Eulalia, their very own ship, in full bearded and velvet-robed glory.

The mayor passes them the keys to the city, cannons are fired, and fireworks are set up as the Magi’s magic officially begins.

A beautiful cavalcade of floats, including ones with camels, elephants, giraffes, and eye-catching costumes, parades them through the streets

The heart of the New York Christmas is located in Rockefeller Center. From 1936, it has had its renowned ice rink, and since 1931, there has been a decked tree there as a holiday custom.

The Rockettes appear in the yearly Christmas Spectacular, which is held nearby at Radio City.

More than 100 vendors offering clothing, presents, snacks, and beverages are present at the Holiday Market in Columbus Circle, which is located on the southwest corner of Central Park.

Christmas joy can be found amid the city of Nairobi’s festive chaos.

Numerous establishments, public transportation, and the lengthy lineups at restaurants and supermarkets will all be filled with raucous carol music that is being played in numerous languages for visitors.

If you go to a friend’s house or a well-known restaurant, you might get a plate piled high with chapati (flat bread), pilau (a spicy rice dish), and grilled meat, or nyama choma in Swahili.

At the picturesque Karura Forest Reserve, made well-known by Nobel laureate Wangari Maathai, partygoers can work off the calories with a hike. Safari alternatives are available at the well-known Nairobi National Park, where visitors can view rhinos, lions, giraffes, and other wildlife against the backdrop of the enormous metropolis.

The vibrant outdoor marketplaces, like Maasai, provide genuine African artwork, jewelry, garments, and fabrics that are exclusive to Kenya for Christmas gifts.

German tradition has it that more than 2 million people visit the Nuremberg Christmas market (Nurnberger Christkindlesmarkt) each year. It has a long history; the earliest recorded written reference of it is from 1628.

Visitors can discover traditional, frequently handmade Christmas decorations, wooden toys, and a variety of food and beverages at market stalls in “the little city of wood and cloth.”

Adults can indulge in glasses of mulled wine and spicy Nuremberg gingerbread.

And the Toy Museum is available to families who are bringing their children.

Christmas lights abound in and brighten up the capital of Colombia, which is located at a high height.

The custom of “Ruta Navidea,” or the Christmas Route, is practiced in Bogotá. Celebrities go across prominent areas of the city to observe the spectacular performances. Visit some of the top locations, including the stunning Monserrate, a tall mountain that towers over the city, by clicking here.

The day before the Immaculate Conception, December 7, is observed as Da de las Velitas (Little Candles’ Day). In Colombia, it serves as the official start of Christmas. On windowsills and balconies, people light paper lanterns and little candles. Christmas and other famous holidays are wonderful here and anything you can think beautifully is there. Natilla, a custard dish that is eaten with other holiday favorites like buuelos, is similar to a flan or pudding (fried dough balls served hot)

Coming to Bogotá during the holiday season has one travel perk: the dry season is just getting started.

Even though December holidays  is in a period of the year when there is less activity in business, Christmas in Malta, a predominantly Roman Catholic island in the Mediterranean Sea is joyful and spiritual.

Christmas in our country is not complete without visiting presepju, or nativity scenes. Residents open their garage doors and sometimes even their shutters to display their holy Christmas treats to the public each year.

A trip to the privately held Malta Toy Museum is a loving tribute to childhood, displaying dolls, soldiers, train sets, and clockwork tin trinkets going as far back as the 1790s. 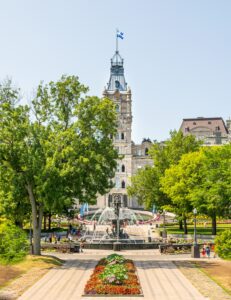 Quebec, a sanctuary for outdoor, environmentally conscious enthusiasts, is humming with winter activity and has holiday events to suit all preferences.

It has been transformed into a charming Christmas village in Old Quebec. Visitors to the German Christmas market can peruse the offerings if they enjoy sausage and toasted chestnuts. Those with a stronger religious bent can browse a display of nativity scenes from throughout the globe.

Snowmobiles from Nord Expe are available for speed demons. For those who may not be able to witness Christmas activities there, February 3 to February 12,2023 should be noted as the Quebec Winter Carnival will take place on those days.

In this vibrant town in central interior Mexico, Christmas is both a solemn and festive celebration. Piatas, posadas, and ponche sum up the festivities.

Prior to December 24, tourists might run into Mary and Joseph strolling through the neighborhood as residents make their way from house to house while singing as they plead for “posada” (or “shelter”) as they recreate the trek to Bethlehem.

A lengthy evening of wandering around this cobblestoned city, which was named a UNESCO World Heritage Site for its abundance of big churches, well-preserved architecture, and grand zocalos, is capped by piatas and ponche (a mulled fruit beverage).

Even “Silent Night” originated there. On Christmas Eve 1818, the well-known hymn was performed for the first time in the nearby Oberndorf bei Salzburg.

A stranger Yuletide custom also takes place in the town.

People in Bavaria (nearby Germany) and Austria dress up as the terrifying Alpine beast known as Krampus and rampage through the streets looking for misbehaving kids who need to be punished. There are several dates in December when the Krampus runs take place in Salzburg.

In this border city that is influenced by both cultures, you can enjoy Christmas with both French and German flavors. Strasbourg claims to have one of the oldest Christmas markets in Europe, dating back to 1570.

A gastronomic and visual wonderland has been transformed into Strasbourg by a series of themed Christmas villages. Numerous locations are home to hundreds of stalls.

Create photographic and visual memories with a 30-meter-tall (98-foot) Christmas tree that is brought to Place Kléber’s central square each year and decked out with decorations and lights.

Along with the traditional market, there is also the OFF alternative Christmas fair, which includes a street art trail and live music.

In New Zealand, the classic Christmas colors of red, green, and white have a completely different connotation.

Here, crimson stands in for the phutukawa, a ruby-red flowering Christmas tree native to New Zealand. White is a metaphor for the fine, sandy beaches. Green, too? New Zealand, of course!

A Visit to Queenstown, where high summer temperatures allow people to jetboat, river surf, or paraglide on Lake Wakatipu would be most memorable, if you wish to accompany Santa in his surf shorts, that would be very awesome.

Or, travelers can just pitch their tents beside the lake and cook up a substantial Christmas dinner of lamb, shellfish, and chicken.